Coronavirus: it's amazing the difference a few days makes

Note: I wrote the following on March 25 from a cruise ship on our way home from Pago Pago on American Samoa. Now that we're home, I realize our perspective on the the virus has changed drastically. From earlier reports from our daughter and cable television we knew there would be food shortages and fewer cars on the road. We knew about the rising number of cases and the increased need for ventilators, masks, and trained caregivers. 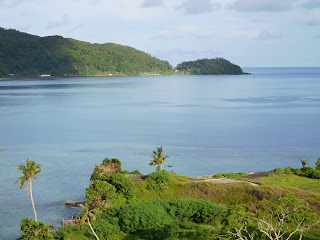 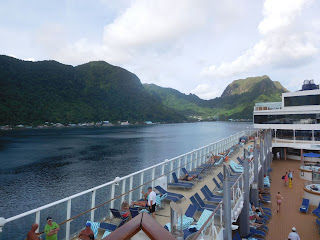 But seeing is believing. And perspective is everything. I'm publishing this because it's what happened to us, beginning on St. Patrick's Day and until March 25, which is my husband's birthday.
Our "suffering" was light at most compared to those directly affected by the virus. Our prayers are with them.

If this post sounds Pollyannaish I understand. Here goes:

St. Patrick’s Day, 2020—My husband surprised me with a pinch.  I’d forgotten to wear green. Other things about this day made me want to pinch myself, to make sure what I was experiencing was true.
I stood facing the window of the cruise ship, the Norwegian Jewel. More than 1700 passengers were on board, 700 of them Americans.

The island in back of us, American Samoa, was shrinking by the moment, as we sailed away bound for Honolulu. We peeked at the port Pago Pago where we had refueled the night before.

American Samoa could be called the Second Emerald Isle, at least from my point of view. Green was the dominant color—no pinching allowed. Palm trees and assorted foliage dominated, topped by jagged cliffs. As our ship sailed toward the ocean, the landscape shrank. Houses, shops, and an oil refinery were all miniaturized and would soon disappear.

A lone American flag stood atop a church.

Why weren’t we able to disembark the previous day to explore this island? Our cruise’s original itinerary included ports in Australia, New Caledonia, Fiji, Polynesia, plus the Samoas. All that began changing when the pandemic coronavirus hit. We began sailing on February 28. Soon country after country began closing their borders and their ports. Eventually this meant we had 13 straight days at sea.

March 25 was the banner day for all of us.  The last load of passengers left Honolulu to fly to other ports of the world, each called home.

The crew on our ship and management of Norwegian Cruise Lines were wonderful. We were cocooned, in a good way. Our hands were sprayed with sanitizer at every turn—before entering the dining areas, the auditorium and other public areas.  The staff has served us remarkably well, making our beds, preparing our meals, and providing entertainment! Even more important, to my knowledge, no one on the ship contracted the virus. We went home healthy if not a few pounds heavier.

Television kept us in touch with the news of the virus and we had limited contact with folks back home. We have been encouraged by the vigilance of leaders in many nations as they fight the virus together.

French Polynesia is still on our bucket list. We hang onto green—the symbol of hope and life.  As our old friend Kermit the Frog croaked, “It’s not easy being green!” No, it’s not. But it shows that we are growing!  By the way, on March 25 my husband celebrated his birthday. In honor of him, no pinches. Instead, birthday candles were in order!